A few lines about the Villa Marina & Gaiety Theatre, who we are and what we do 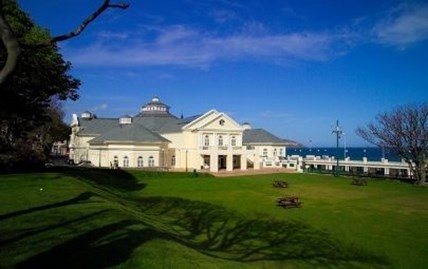 The centrepiece of the Villa Marina is the Royal Hall. A spectacular auditorium that combines Edwardian grandeur and comfort with the latest sound and lighting systems, to create an amazing atmosphere at every show. Hosting some of the biggest names in music and comedy, it promises a great night every time you visit.

The Villa Marina is home to the Broadway Cinema, showing the latest movie releases seven days a week.

Last but not least the Villa Marina is home to the popular Dragon's Castle Play Area is the perfect place to let your young adventurers explore whilst you relax with a cup of coffee!

VillaGaiety is committed to improving our facilities to help create and maintain an inclusive and accessible experience for all of our venue’s customers. For more information about accessibility at the Villa Marina, click here.

The Broadway Cinema - located in the Villa Marina shows the latest film releases seven days a week. With a variety of genres to suit everyone and state of the art equipment giving you the ultimate cinema experience.

The Broadway Cinema is also fully accessible, able to accommodate two wheelchairs. We also offer a number of accessible screenings, with subtitled and relaxed screenings available on selected films. For more information about accessibility at the Broadway Cinema, click here.

Duffy Waldo and Nel invite your little explorers to jump, climb, side and swing at Dragon’s Castle - located in the Villa Marina. We have Pop-in and Play session available on Monday & Friday 09:30am – 11:30am (Doors open 9.20am) & 12.30pm - 2.30pm (Doors open 12.20pm). Plus the space can also be hired for parties, special events or specialist sessions.

In 2020 Dragon's Castle extensive improvements were made to the space, including the introduction of a new sensory area within Dragon’s Castle on the ground level, especially for babies, younger children and children with additional needs. As part of this area, we’ve got some fantastic equipment including chrome tubes, fibre optic lighting and chandeliers and some bubble stubs and beads, plus there are some comfy bean bags inside too. We hope that by introducing sensory play, this provides a fun and engaging way for both young children and children with additional needs to be positively challenged with visual, sound and tactile opportunities to help them develop certain skills and actions. Not only that but Duffy, Waldo and Nel wanted to make sure that children of all abilities can come and enjoy the social interaction of attending a soft play area too. For more information about accessibility at Dragon's Castle click here.

For more information or to book tickets to our Pop-in and Play sessions click here.

The Villa Marina was built as a private residence called Marina Lodge in 1806. It has been used over the years as a school and a home for the island's lieutenant governor in 1861, Francis Piggot.

The Villa Marina Kursaal was first opened as an entertainment complex by the Lieutenant Governor, Lord Raglan in July 1913. In his opening speech the island's Lieutenant Governor, Lord Raglan said the building would "provide for a better class of holidaymaker". The facility was to cater for the Isle of Man's booming tourist industry, which during 1913, attracted more than 500,000 visitors. The initial entertainment line-up included some of the biggest stars of the day including Australian singer Dame Nellie Melba and English music hall comedian George Robey.

In 1914 after the declaration of war against Germany and her Allies, the Kursaal part of the Villa's name (which means health spa in German) was dropped after being deemed unpatriotic.

After the war, the building was used to welcome home the island's war heroes and in 1919 a reception was held for 100 officers and men from the island who had been decorated for bravery.

During the years between the wars the island regained its status as a popular tourist destination and dancing in the Villa Marina Royal Hall became a popular pastime for many and with the outbreak, World War II the centre became a venue for fundraising events aimed at helping Manx soldiers and their families.

The post-war period was a lucrative one for the Isle of Man which was soon, once again, welcoming hundreds of thousands of tourists but with the advent of cheap European travel, the centre was forced to reinvent itself.

It changed hands in 2000 when the complex was taken over by the Isle of Man government.

It was then restored and reopened in 2004. 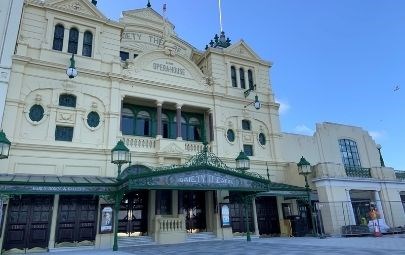 Proudly positioned on the promenade of Douglas stands the Gaiety Theatre, the jewel in the Manx entertainment crown. Steeped in history and tradition, the Gaiety Theatre is one of the finest remaining examples of work by the legendary theatre architect, Frank Matcham. First opened in 1900, the Gaiety Theatre underwent extensive restoration for 30 years to return it to its current magnificent condition. It's a stunning setting to enjoy a year-round calendar of plays, musicals, concerts and comedy shows.

Please note that our efforts to improve accessibility at the Gaiety Theatre are somewhat restricted given the age and historic nature of the theatre. We have nonetheless made reasonable adjustments to improve access to this venue, as much as possible to ensure as inclusive an experience as possible. For more information about accessibility at the Gaiety Theatre click here.

With tours available throughout the summer season, or during the winter by arrangement, this breathtakingly restored Victorian theatre is one of the Island's finest attractions.

Private tours can be made by arrangement during winter months.

Please note that due to the original features of the theatre, many parts of the tour are inaccessible for people with mobility-related disabilities.

The Gaiety Theatre is a participant in Visit Theatres. Its website, is a user-friendly guide to theatre tours in Great Britain, the Netherlands and Belgium with information on tours and theatre buildings' history and architecture. Visit Theatres is part of the European Route of Historic Theatres project supported by the Culture Programme of the European Union.

The Gaiety Theatre was built in 1899 to the designs of architect Frank Matcham as an opera house and theatre. Along with neighbouring venue the Villa Marina, the Gaiety Theatre stands on land which was once part of a grand Regency estate.

A theatre was originally built in 1893 at the height of the Island's tourism boom to the design of John Rennison (architect of the Sefton Hotel in Douglas) and commissioned by Thomas Lightfoot (who was the originator of the Douglas Horse tramway) and C.F. Maley who owned the plot. It was then known as The Marina. Six months after opening, the aforementioned consortium was declared bankrupt and it was bought out of auction and renamed The Pavilion.

The Pavilion was owned by Richard Maltby Broadbent, who was the entrepreneur of Groudle Glen, the Groudle Glen Railway and later the Douglas Head Incline Railway. The idea was that The Pavilion would match the theatres and dance halls at other popular tourist resorts such as Blackpool and attract a similar level of tourists. However, the venture was not a success, and The Pavilion closed after just six seasons following which Broadbent sold the land to the Palace and Derby Castle Company Ltd.

On the 9th December 1899 a notice in the ERA Newspaper announced the construction of the newly named Gaiety Theatre by the Palace and Derby Castle Company Ltd. They commissioned renowned Theatre architect Frank Matcham to convert the narrow shell of The Pavilion into an Opera House and Theatre.

The Gaiety Theatre opened on the 16th of July 1900. It enjoyed considerable success, particularly in the Edwardian era until the outbreak of the First World War in 1914. Despite various attempts to make it a commercial success after that and particularly in the years following the Second World War there was a period of structural deterioration, to such an extent that by 1970 the theatre came close to being demolished. Fortunately, that was avoided when the Manx Government purchased the building in 1971.

In 1976 restoration began to return the building to as near to its original appearance as possible, choosing the original paint colours, wallpaper, and carpeting to replicate its 1900 opening condition. The stage machinery in the theatre is amongst the most complete and unusual in any theatre in the world. Built at the end of the Victorian era, one of the traps, known as a 'Corsican Trap’, is now unique in the world, being the only surviving example. The Theatre is today considered one of Frank Matcham's finest surviving Theatres.

In 2000, one hundred years after opening, on 16 July 2000, the centenary was celebrated with a performance of "The Telephone Girl" which opened the Gaiety in 1900.

It is said, however, that some of those who loved the theatre in their lifetime continue to return after their passing. It is not unusual for a theatre to claim that it is visited by ghosts and the Gaiety is no different. Home to at least four ghosts, there is the lone man who has been seen sitting in one of the boxes and then at some point gets up and disappears through the wall. There is a woman dressed in black who walks in the shadows of the stairways and corridors. Then there is an unseen ghost described by some as the 'helping hands'. Who waits in the wings to hand props to actors or gently guide them onto the stage. Probably the most famous is the 'Lady in seat B14'. Claimed to have been seen by many and described as an elderly lady who sits and watches the performances, or just appears for sections that she is interested in. Some say she lost her husband in the First World War and often the seat B14 is left vacant to accommodate her should she wish to visit.

The beautiful art deco style arcade is home to one of the Isle of Man's best kept secrets the Mighty Wurlitzer. A purpose built performance area provides audiences with one of the best settings to enjoy the experience of Wurlitzer music.

The Arcade also features Café Villa, with brilliant views and even better food it's one of the best places to sit and watch the world go by in the beautiful surroundings of Douglas bay and the new cultural quarter.

Harlequin Costumes, which is more than just a costumes hire shop, they sell and make costumes and accessories.

The Arcade also has public toilets and is fully accessible. For more information about accessibility at the Villa Marina Arcade click here.

The Wurlitzer installed in the Villa Marina Arcade is an outstanding and rare example of its type – A Mighty Wurlitzer. It is a sister instrument to the one originally installed in the famous Tower Ballroom, Blackpool for the legendary organist Reginald Dixon.

A Brief History of the Isle of Man Wurlitzer

The Wurlitzer was built in Tonawanda, USA and signed out of the factory on 25th November 1929. Described as a Style 200 Special, it was given the opus number 2081.

Originally destined for the Marlborough Cinema in Holloway, London, on arrival in the UK it was thought that it was too small. So was instead installed in the smaller City Cinema in Leicester, where it remained until 1957.

Bought for private use by Councillor Allan Hickling, it was installed into underground rooms in the garden of ‘Dormston House’ Sedgley, where it became well known after being played on BBC Radio 2 programme “The Organist Entertains” by an organist called Brian Sharp.

Acquired by the Isle of Man Government in 1989, it became popular entertainment for tourists at Summerland until its closure in 2004.

The Wurlitzer has now been fully restored by renowned organist, Len Rawle and is the focal point of the newly refurbished Villa Marina Arcade.

For more information about the Isle of Man Wurlitzer, contact: