Friends of the Gaiety Theatre celebrate their 40th birthday

The Friends of the Gaiety (affectionately known as the FOGs) was set up in 1979 and to celebrate this anniversary and to encourage more supporters and volunteers a new website has been set up (fogs.im) which sets out the history of the theatre as well as giving everyone options to become a member of FOGs. The website is also selling a batch of unique Commemorative envelopes with original stamps.

FOGs was originally set up with two main aims in mind. The first was to raise sufficient funds to help restore our lovely theatre to its splendour of 1900 when it first opened, and the second aim was to encourage and recruit volunteers to support the theatre’s full-time staff on all areas of customer service during performances.

The theatre has had a very chequered past. It opened with a performance of The Telephone Girl in 1900 and prospered for the first part of the 20th century, but after the First World War the fortunes of the theatre waxed and waned. There were many brave attempts to make it viable — including an ice rink and cinema, but despite these efforts, the theatre became less and less commercially viable and the fabric of the building went into an inevitable decline. Plasterwork was falling down and the theatre ended up in a very sad state; so bad in fact that a decision was made in 1968 to redevelop the site. A firm of demolition contractors was hired to carry out the evil deed, but fortunately, at the last minute it was reprieved after the Government recognized its value to the Isle of Man.

Mervin Stokes joined the theatre in the early 1970’s and recognized how important it was to return the theatre to its original splendor when Frank Matcham first designed it, and in 1979 the Friends were formed to support the costs of all the necessary work.

Over the years FOGs has raised many thousands of pounds to help with the restoration, including wall tiles, repainted frescoes, refurbishment of toilets etc, with over £80,000 having been donated to the theatre over recent years.

David Stacey (Chairman of FOGs) said “We are very proud of our army of over 80 enthusiastic volunteers who show customers to their seats, sell ice creams and teas etc. They play a key role in helping the theatre during performances. Many shows rely on FOGs volunteers, and the theatre is always keen to welcome new names. Information can be found on the FOGs website. By supporting FOGs you are able to play a key role in continuing the momentum of all future refurbishment work, which at the moment includes plans for the Circle Bar amongst other projects.”

In recognition of the 40th anniversary, we've added an option to donate to the FOGs when purchasing tickets online for any of our events and performances. Emma Callin, Head of Villa Marina, Gaiety Theatre and the Arts said “We are indebted to the Friends of the Gaiety for everything they have supported at the theatre over the last 40 years. I am glad we can help them fundraise via our ticket sales and I hope this helps them continue for a long time into the future.” 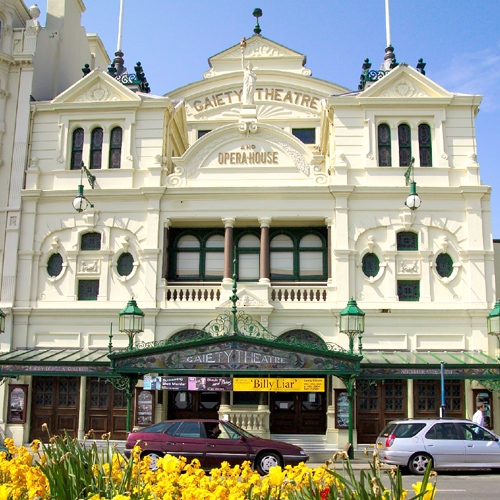 PDMS delivers new website for VillaGaiety Subtitled film screenings introduced What goes on behind closed doors… Duffy & Waldo have a revamped castle and a new friend too! Happy World Theatre Day Easter Entertainment What's On Online in May After the Interval Mental Health Awareness Week August Band Holiday Weekender Love at First Show
Make a donation to 'The Friends of the Gaiety' The Friends of the Gaiety website